We would like to provide refugees in Japan to study Japanese. 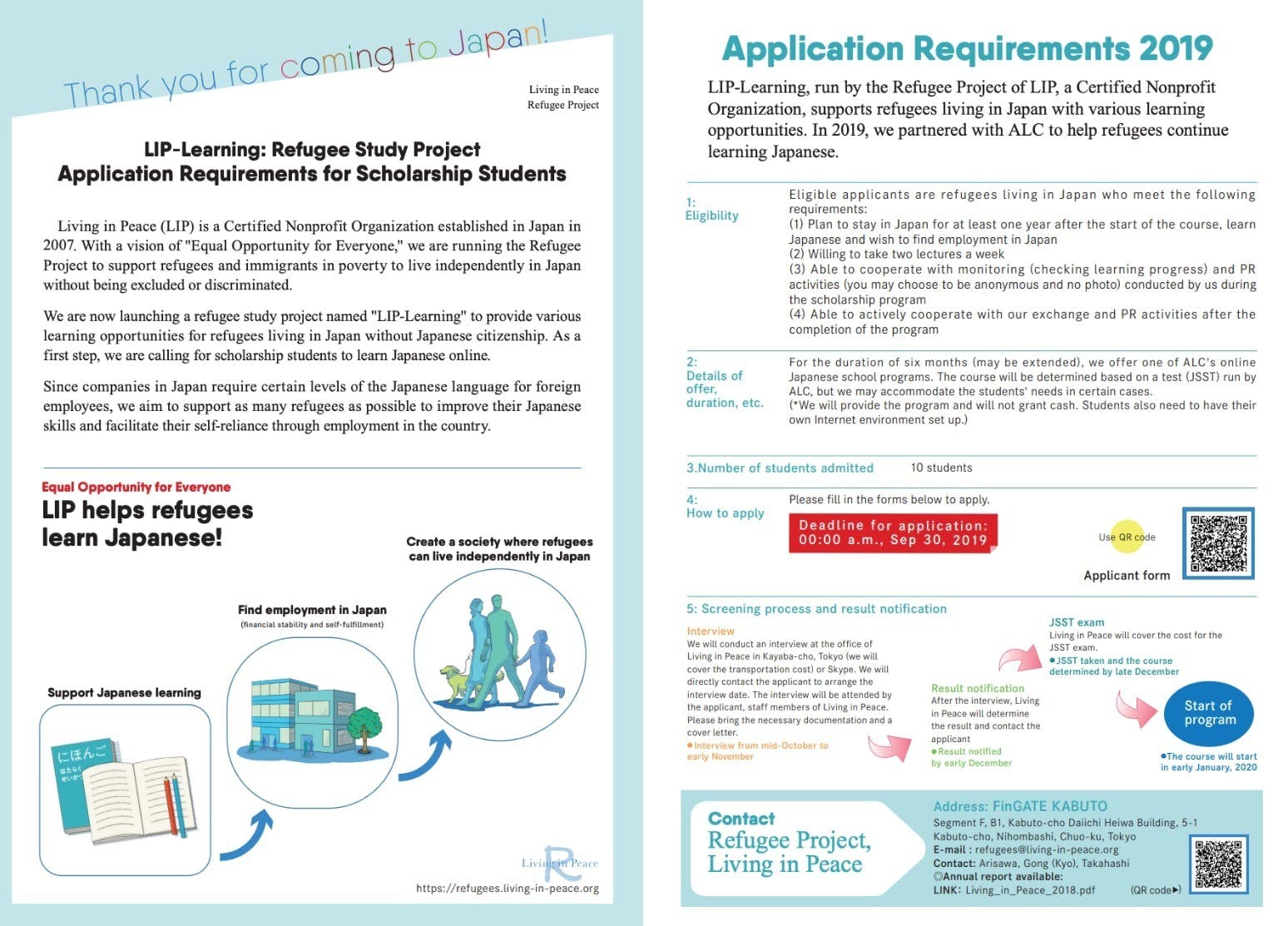 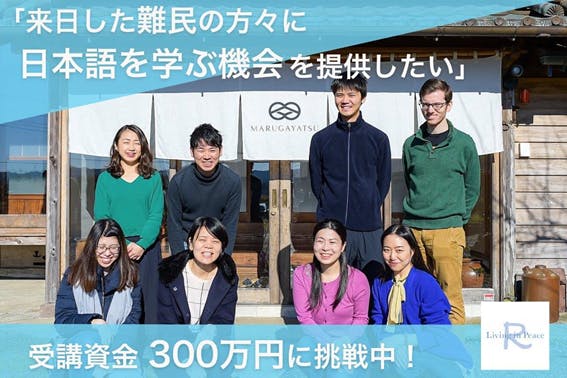 [I can’t communicate with people at supermarkets and hospitals]

[I can’t blend in well with the neighborhood]

This project aims to raise 3 million JPY to help those who cannot attend language school due to their residence status by offering them alternate language courses.

For those refugees admitted as refugees to Japan are allowed to live in Japan and enjoy the rights and responsibilities as other citizens.

However, there is a huge challenge when it comes to learning the local language. Time and time again, we meet those who could not overcome this challenge and as a result, suffer in their daily lives. 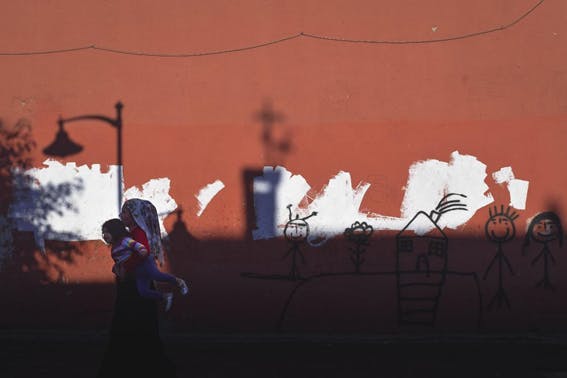 Most Japanese companies require high level of Japanese proficiency when hiring foreigners. Even if the refugees used to work in highly skilled professions in their home country, if they can’t overcome the language barriers, it is difficult for them to sustain life in Japan.

[I can’t communicate with people at supermarkets and hospitals]

In Japan, because of the language barrier, there are refugees who are reluctant to go to the hospital even when they are sick. There are also those living in isolation as they are unable make connections with Japanese society.

There are very few things refugees can do by themselves if they want to overcome these difficulties. Arriving in Japan with only the clothes on their back, they cannot afford language courses. Additionally, it is difficult to get admitted into the government-supported language courses due to its high standards. Moreover, the length of the course is insufficient. While some NGOs do offer opportunities to receive Japanese language education, there is neither enough resources nor funds to fully cover the need.

Furthermore, most courses offered right now use recorded materials in their lessons, lacking interaction. We have received feedback from refugees who attend such courses that the lack of interaction and ability to ask questions to a teacher make appropriate language acquisition difficult. 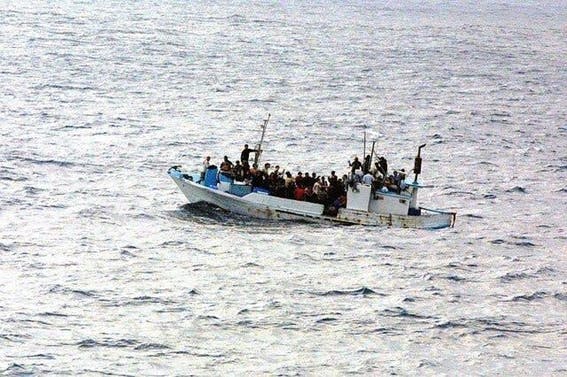 Many of us may still remember that in 2016, a Refugee Olympic Team attended the Rio de Janeiro Summer Olympics.

A refugee is [an individual who has been forced to leave his or her native country because of persecution or fear of persecution (due to their race, religion, membership in a particular social group, or political opinion)]. They are a group of people who would have lived in their own countries but were forcefully removed from their home and people.

For us who live in Japan, the word “refugee“ could sound very distant; however, there is a large number of refugees presently residing in Japan.

Graph 1 displays the number of refugees admitted in Japan in 2018.  In total, there are close to 15,000 refugees, roughly the same population as a small town..

Graph 2 shows the rate of admission for refugees in Japan. It is very difficult to be admitted as a refugee in Japan, and it takes a long time to complete the process.

As most refugees hold a short-term visa when proceeding through the process, the actual number of refugees in Japan is much higher.

[Graph 1] The total number of refugee admission 1978 - 2018
Source: based on the Ministry of Justice <Overview of refugees admission in 2018>’s appendix <The status of refuge provided in Japan>

*1 Settled refugees: Indochinese and resettlement refugees (*including the duplicated number of those who were admitted as settled refugees and then identified also as convention refugees)

*2 Other refuge: those who were not admitted as refugees but are allowed to reside in Japan due to humanitarian reasons

*3 Convention refugees: those identified as refugees based on the definition of Refugee Convention

[Graph 2] The admission rate of refugee applicants in 2019
Source: the Ministry of Justice <Overview of refugees admission in 2019
http://www.moj.go.jp/nyuukokukanri/kouhou/nyuukokukanri03_00139.html 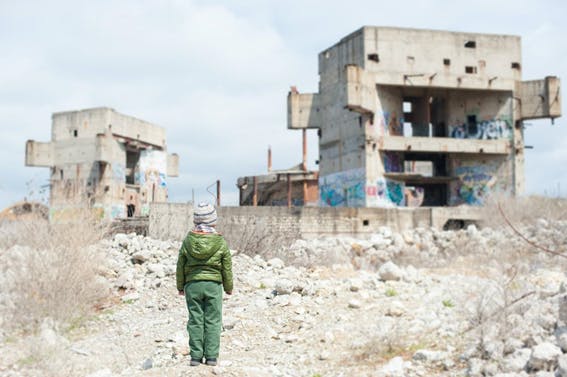 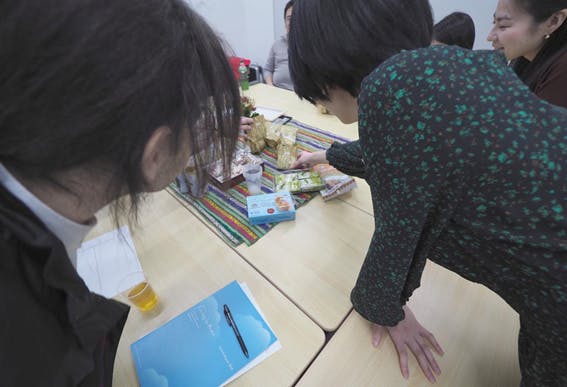 At Living in Peace (LIP), our vision is [Equal Opportunity to Everyone]. For the refugees who are now living in Japan, we would like to support them and help them build an independent life here. We believe the key to independence is work. Work is not only a way to sustain their life but also a way to help them build a network in Japanese society. Because most employers in Japan require high Japanese language skills, we started our online Japanese language support program, “LIP-Learning”.

During the trial period from Jan 2020 to July 2020, we have been supporting 5 students from Syria and UNHCR through LIP-Learning. We held face-to-face meetings with the students after 3 months into the program and received positive feedback with high levels of satisfaction. The positive result solidified our confidence in this program, and we would like to continue providing it to others who would also benefit from LIP-Learning. 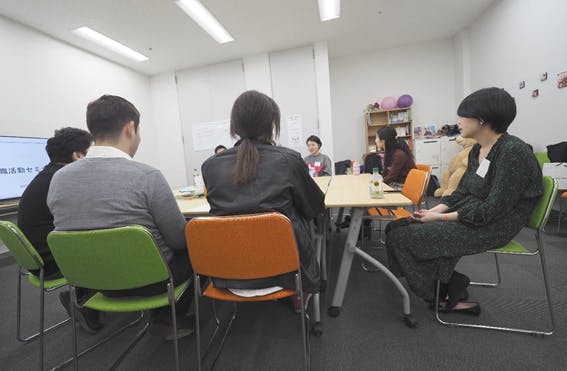 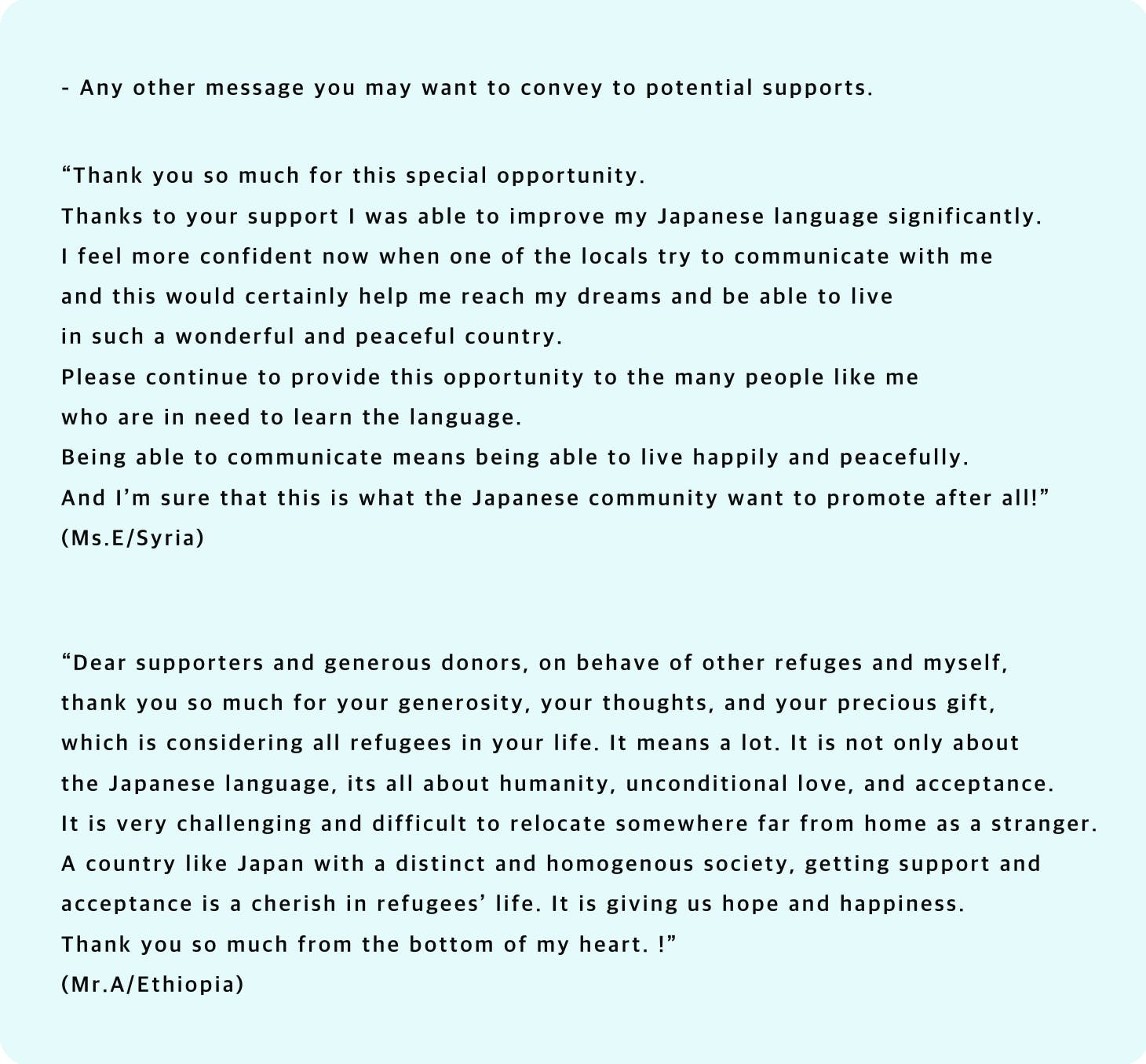 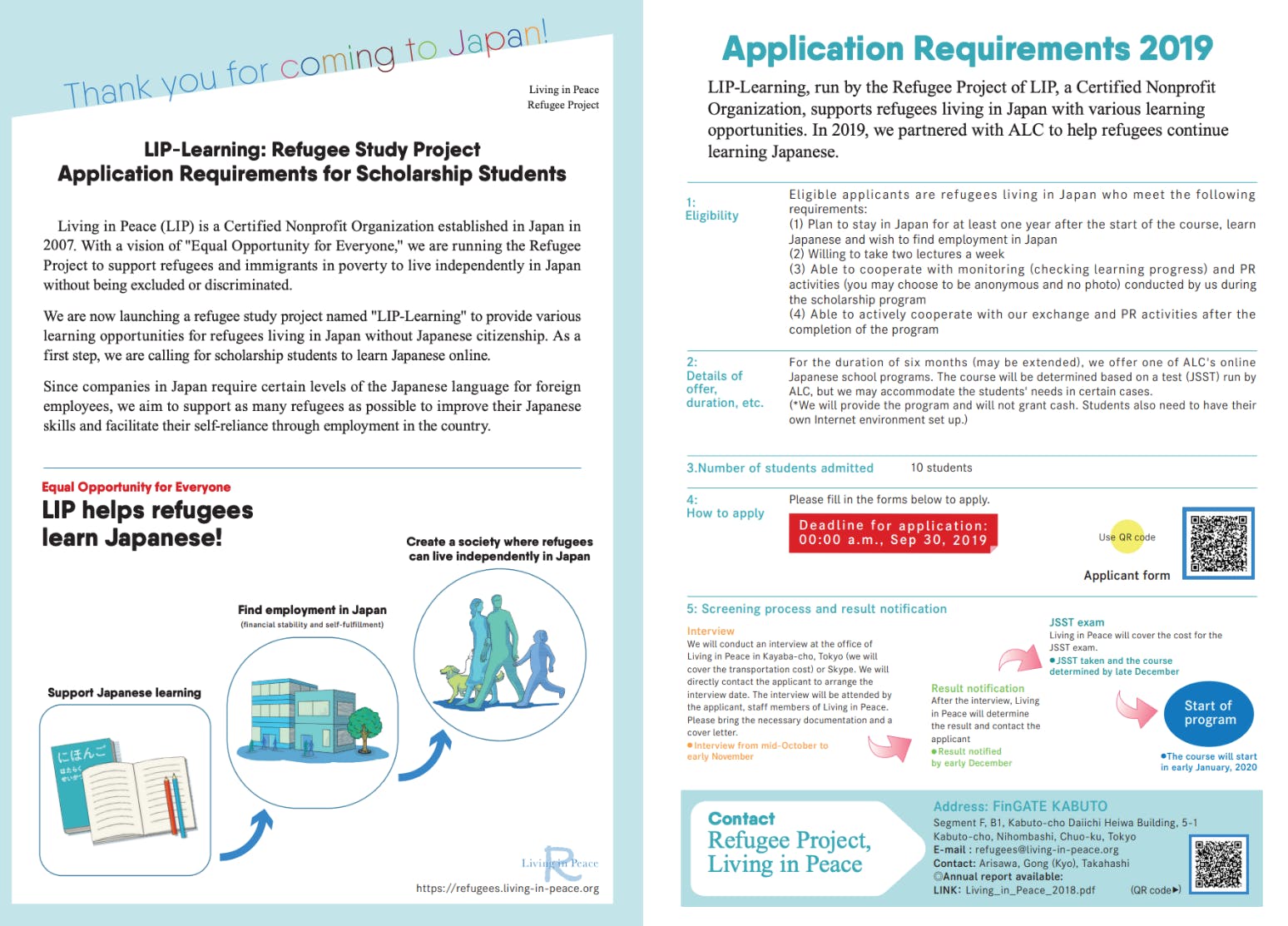 By November 2021, we would like to successfully support 20 refugees through our LIP-Learning program.

We plan to monitor their studies more carefully through regular, in-person meetings, and arrange highly customized programs to ensure each refugee meets, and even surpasses, their goals.

We expect the following positive results:

They will be able to choose professions that they otherwise could not break into due to the language barrier. Those who hold specialized skills, will finally be able to use them in Japan.

Currently, one of the refugees LIP-Learning is supporting is a mother with small child. She found it difficult to join the Japanese community due to the language barrier. For her, being able to speak Japanese would not only help her advance a mutual understanding between her and the Japanese people, but also prevent her from becoming the victim of limited information.

Helping refugees improve their language skills will not only be beneficial to the refugees but also to Japanese people and society.

It will cost roughly 9M JPY to properly support 20 refugees until November 2021 through LIP-Learning. We are crowdfunding through multiple channels, and kindly ask your support in reaching our goal of 3M JPY for every 7 refugees.

At LIP, we don’t have regular employee and all members are working during their free time after work on weekdays and weekends. There will be no human resource fees deducted from the donation and all will be devoted to the running of LIP-Learning Program.

[Living in Peace] is designated by The National Tax Agency as a Certified NPO Corporations and donors would be able to claim tax deduction accordingly.

★Deduction for donation: income tax
For individuals who donate an amount more than ¥ 2,000 to the Certified NPO Corporations annually, tax deductions for your donation can be applied either as [tax exemption] or [income tax exemption] when submitting annual tax return.
※The favorable choice could differ depending on the annual donation amount and income tax rate. Please confirm with your local tax office.

★Deduction for donation: inhabitant tax
Applicable if the donor’s city of residence provides ordinance regarding donation to Certified NPO Corporations.

※Remarks
・The date of receipt for donation will be the date when the amount is transferred from Campfire to Living in Peace.

・Once the donation is received, Living in Peace will issue the digital donation receipt. 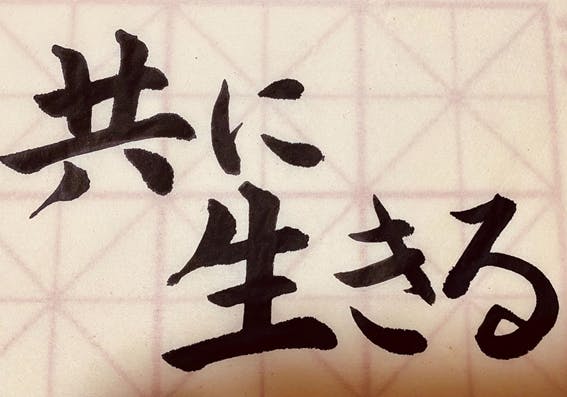 Among the people we live with together in daily life,

there are some who have run from their home countries due to natural disasters, wars, or even political persecution.

Those who  have found refuge in Japan, despite knowing nothing of the local language and culture, are unable to return to their motherland, as it imposes a large risk on their lives.

The refugee mother, though she can take her children to school, is unable to understand teachers’ words and, even worse, unable to help her kids with their homework.

The refugee father, since he cannot find a job only speaking English, must learn Japanese day and night so that he can provide for his family.

Although the refugee grandfather used to be a senior member of the national bank in their home country, he can only work cheap day labor on a construction site.

Did they come to Japan on their own wishes?

If a large enough earthquake or tsunami were to attack Japan, the catastrophe could wipe the country’s economy, forcing even us to find refuge in an unknown, foreign country, just as these refugees have done.

Especially during these few months, we have witnessed the impact of COVID-19 on the entire world. We cannot say that what has happened to the others is no longer our business.

No matter the situation, we are living, and we must live on, together.

It is not about race, nationality, or skin color; it is about building a society where each individual supports one another.

To achieve this goal, it is crucial to be able to communicate in the language that is mutually understood.

We wish for your warm-hearted support to the refugees. 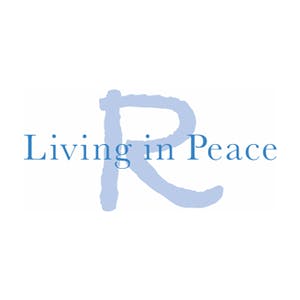